In the 1930s, an aviation plant appeared in the north of Kazan, and gradually the area around it began to be built up with residential buildings. Now this microdistrict is called Sotsgorod and it has been given the status of a place of interest. It was here, in one of the houses built in 1938, that the architect Marcel Iskandarov bought an apartment. “I heard from friends that in this “town” there are apartments with columns, and this was deposited in my memory,” says Marcel. “While looking through ads for the sale of real estate, I saw a photograph of a cluttered communal apartment, where a piece of capital was peeking out between cabinets and some kind of junk. When I realized where it all was, I quickly decided to buy.” 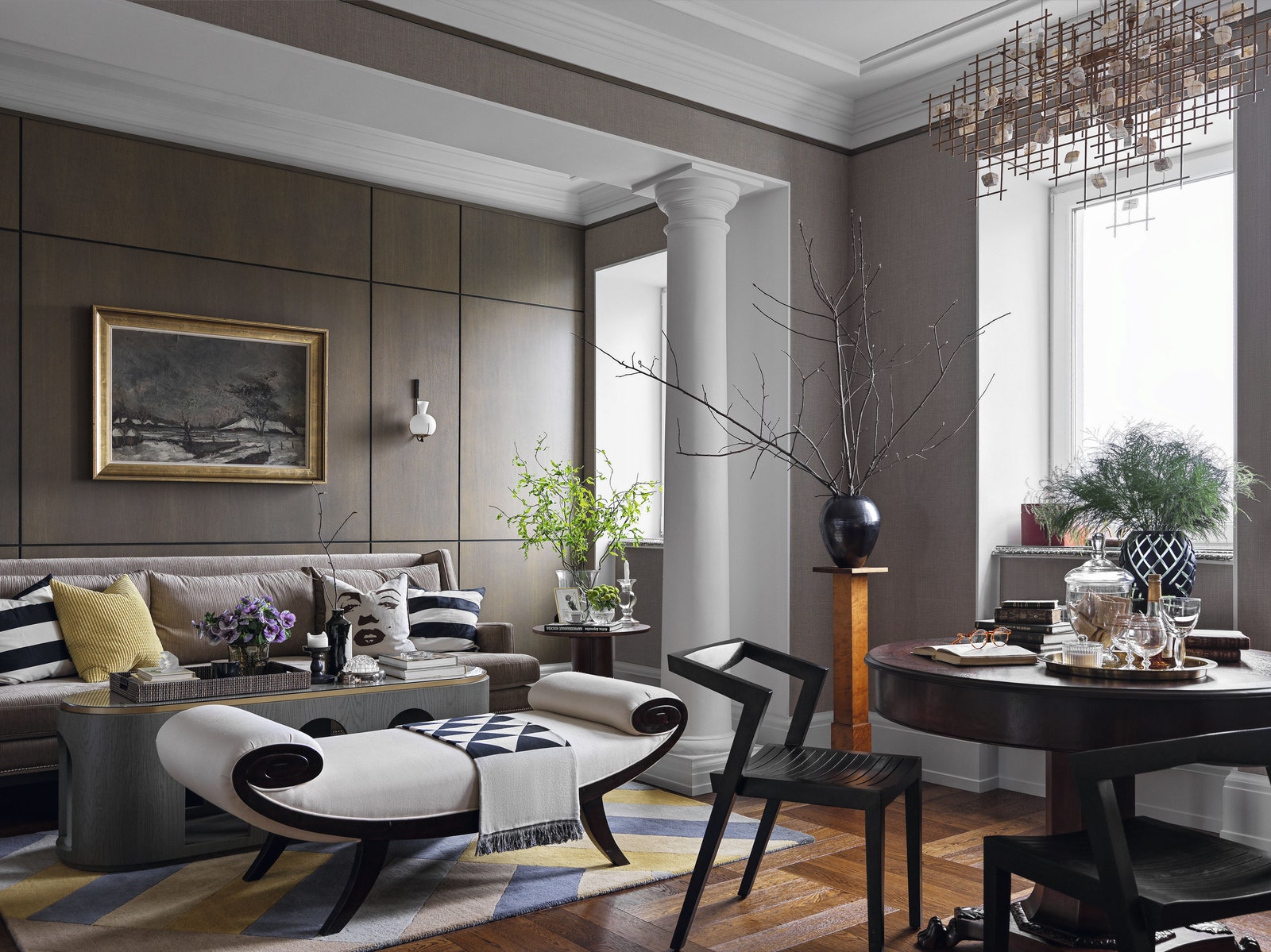 Living room. On the wall is a 1920s painting in an original frame by a Dutch artist; Italian bras from the 1960s; sofa and coffee table designed by Marcel Iskandarov; bench, Christopher Guy; a German pedestal of the 1920s.

People call this house “a house with three arches”, it is quite eclectic: there are signs of constructivist architecture, and art deco, and characteristic of stalinok classic elements. This stylistic diversity is reflected in the interior. 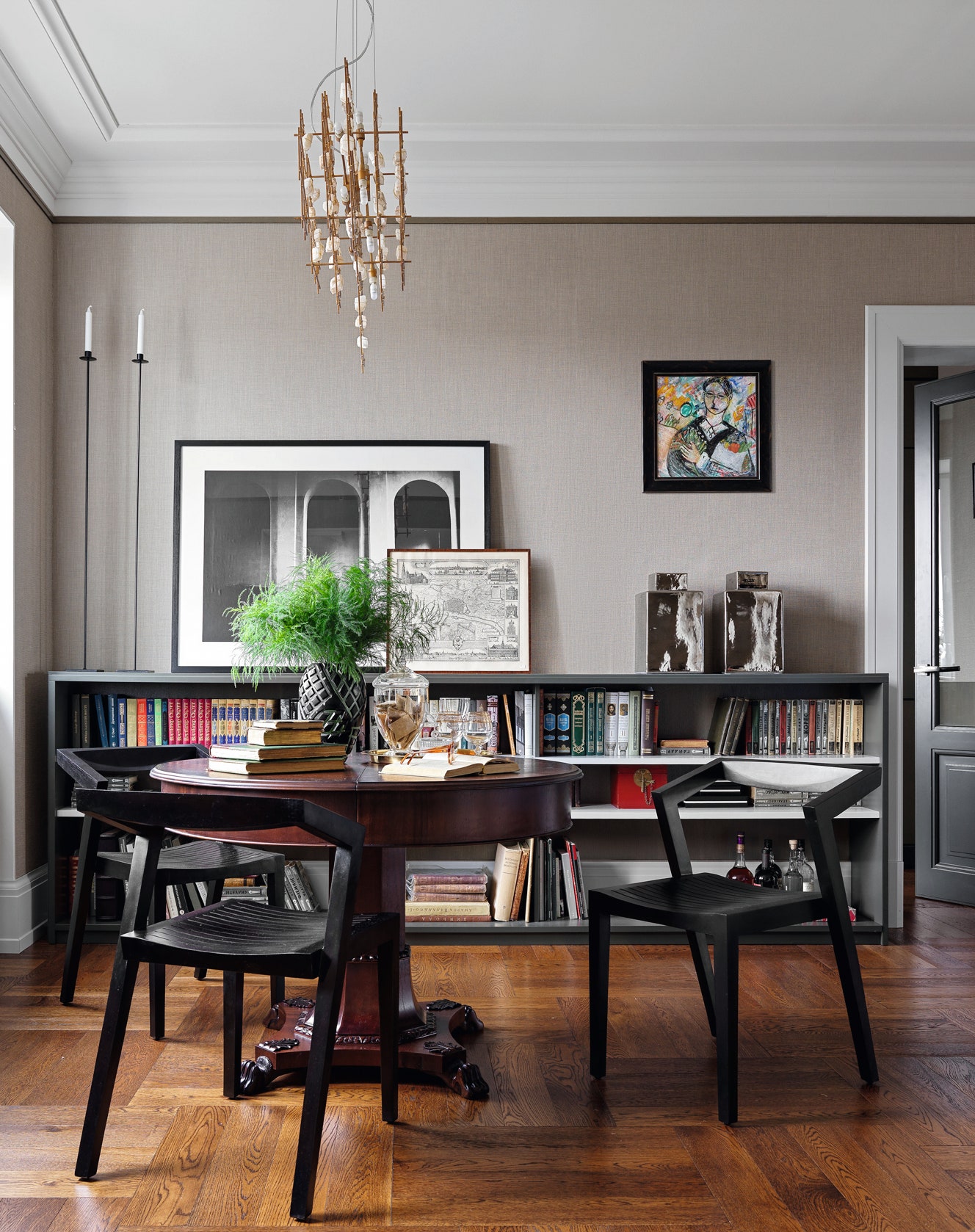 Fragment of the living room.

The layout is typical for the 1930s, and the owner practically did not change it. He redid only the block with a bathroom and a toilet, carving out a space for a utility room in place of the former corridor leading to the kitchen. “The layout was successful: a vest apartment with a central hall and two enfilades. The proportions of the rooms and architectural elements were also perfect,” says Marcel. 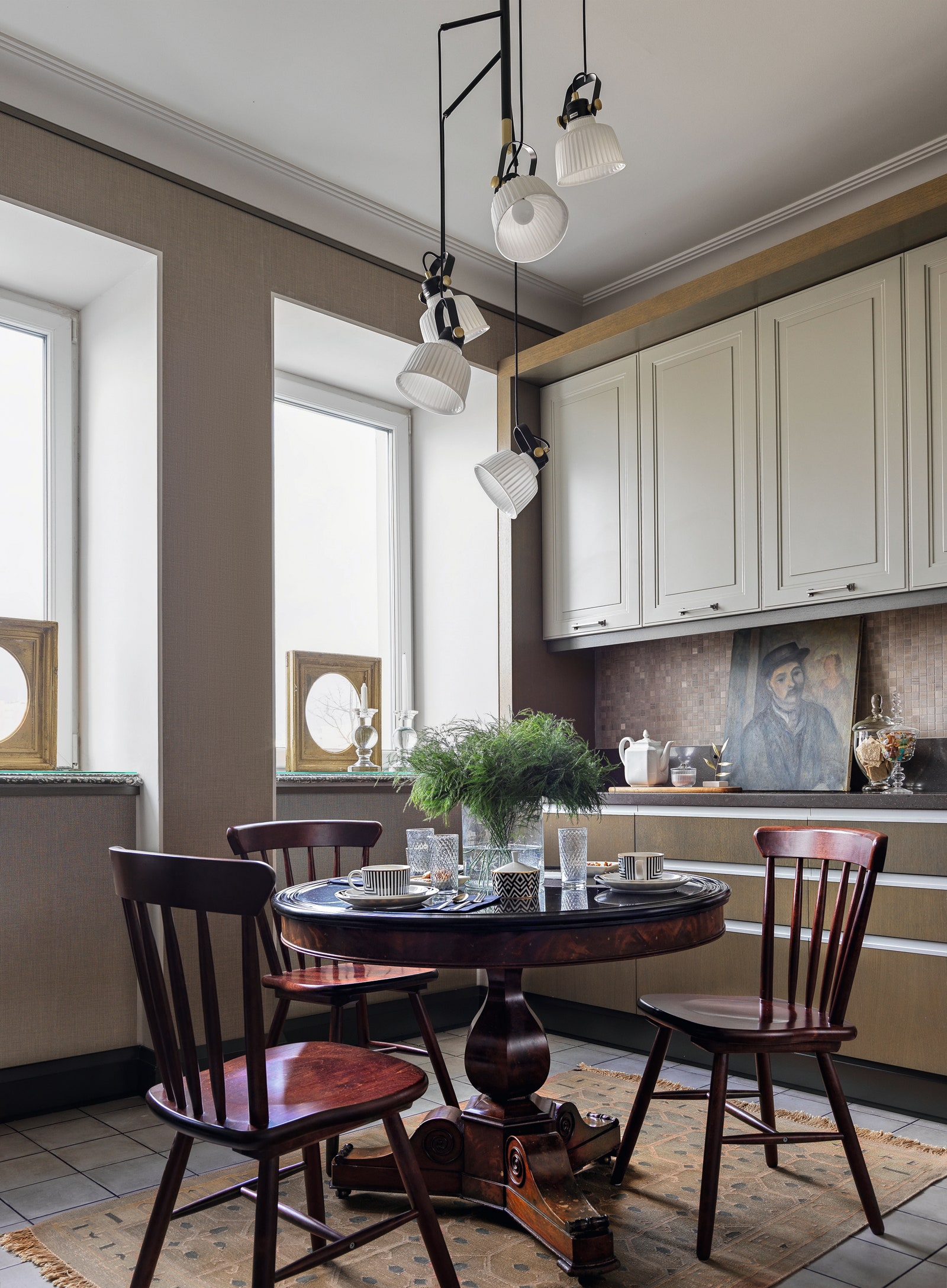 Dining room and kitchen. Finnish table from the 1930s; chairs, Contradictions; vase, Versmissen; photograph of Archway by Alex Serpov; painting by Tatyana Lyarson; French table with stone top, first half of the 19th century; kitchen cabinets according to the sketches of the author of the project; on the window sills are old frames from a decommissioned museum fund; Dutch painting of the early 20th century; Indian kilim on the floor.

In the living room, part of the space is separated by columns that form an alcove. The architect recreated the cornices and other details by looking at them in a collection of typical design elements of Soviet housing. In general, there were many interesting solutions in the interior, for example, the geometric deglazing of the doors leading to the office. “It looked like an art deco house, and this betrayed the overall experimental nature of the architecture of this house,” says Iskandarov. “I was collecting information about it and found out that, despite the small number of apartments, there were twelve different types of layouts, and many with columns. We have applied for recognition of the house as an architectural monument.”

Cabinet. Soviet chandelier from the 1940s; French clock of the 19th century; Soviet etching of the 1970s; armchair, Theodore Alexander; built-in furniture according to the architect's sketches.

The tone of the interior was determined by a painting by a Dutch artist painted at the beginning of the 20th century; it hangs in an alcove above the sofa. The muted earthy gray color scheme seemed to Marseille consonant with Stalinist architecture. Wooden wall panels, which are found not only in the living room, but also in other parts of the apartment, have acquired a grayish tint, and their proportions are set by the size of the artwork. 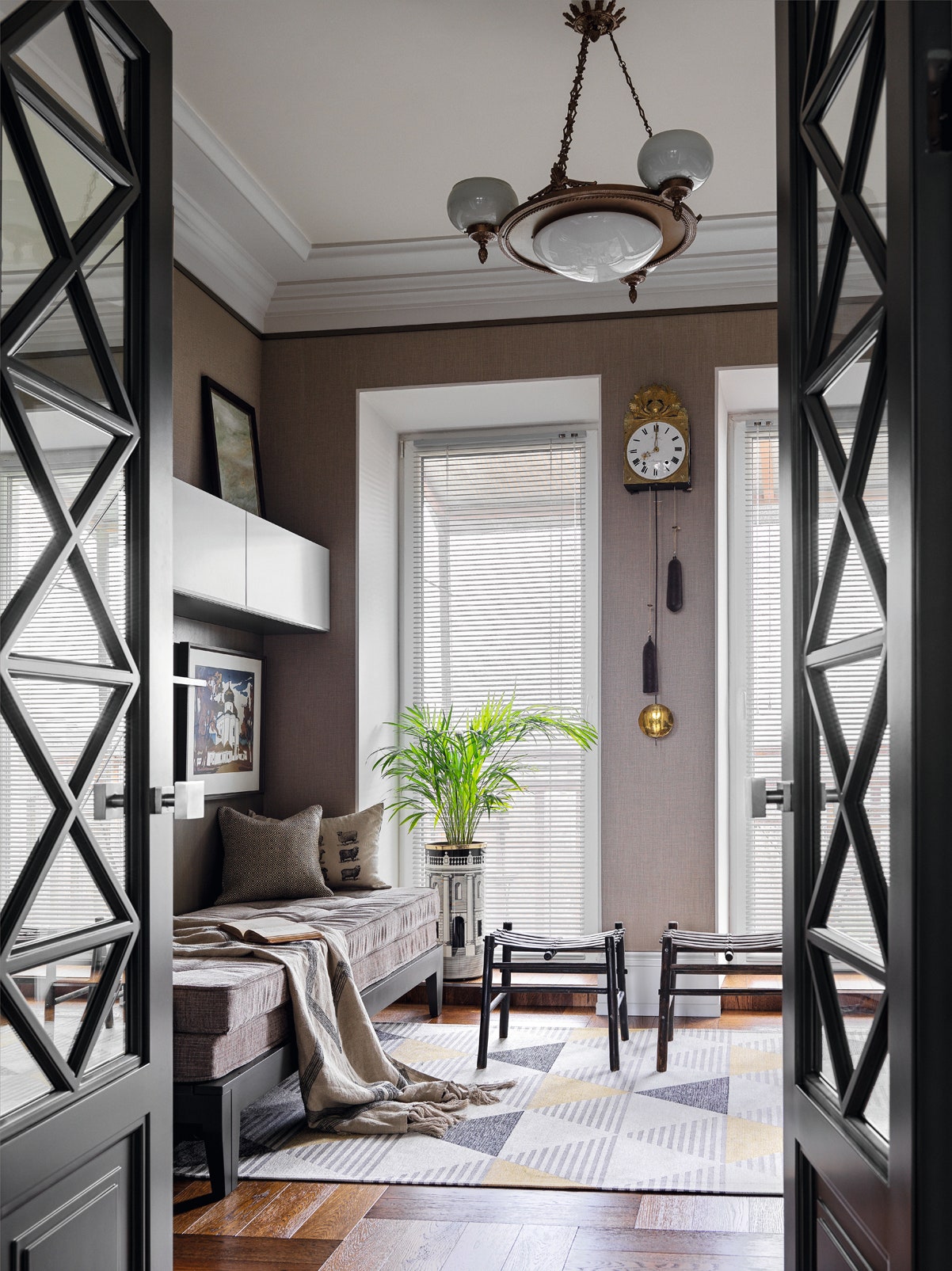 Unconsciously, arches were reflected in the interior: they appeared in the form of a photograph of Marcel's friend Archway and in the base of a coffee table designed by himself. On the floor throughout the apartment is a modern parquet, this is an improvisation on the theme of the classic “herringbone”. “The old parquet could not be saved,” says the owner. “Such a large rapport made it possible not to be tied to the axes and distracts attention from the imperfect geometry of the walls.” 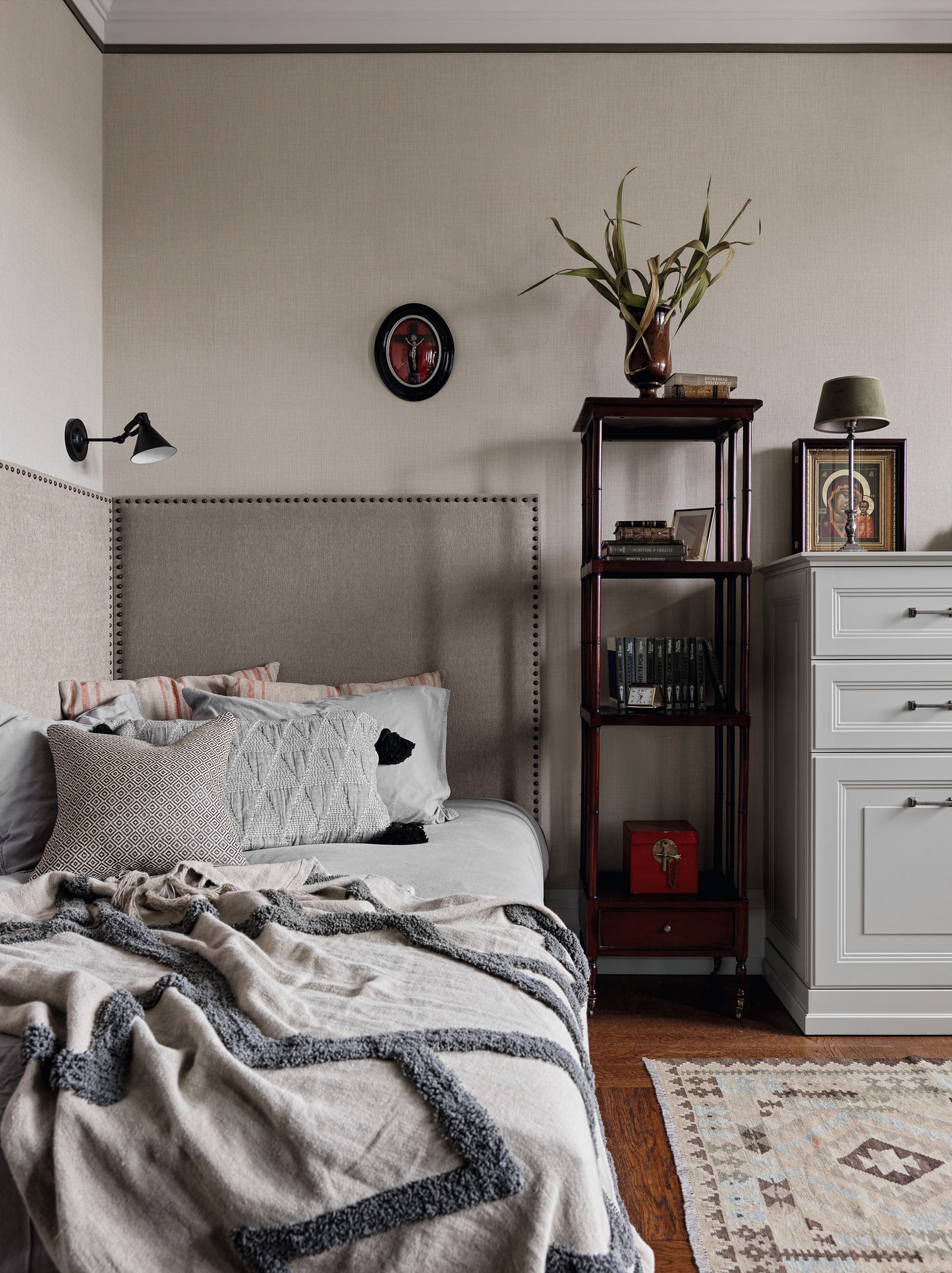 Fragment of a bedroom.

“I had the opportunity to pick up all the things slowly, I brought many from Europe myself,” explains the architect. “I tried to use the entire arsenal of decorative techniques, getting to the bottom of their essence and expressing it in a modern, functional and suitable manner for me.” For example, he draped the front door with curtains in the old style, and hung a graphic lamp over the table in the living room: its shape echoes the pattern that forms the tree branches outside the window.

European and Soviet vintage make great friends with modern in-
terrier items and carpets with a geometric pattern reminiscent of Art Deco. “Soviet aesthetics of the 1930s were created by young and daring architects. It seems to me that I felt this Art Deco drive in the architecture of the house and tried to express it in a strict and at the same time elegant manner,” says Iskandarov. 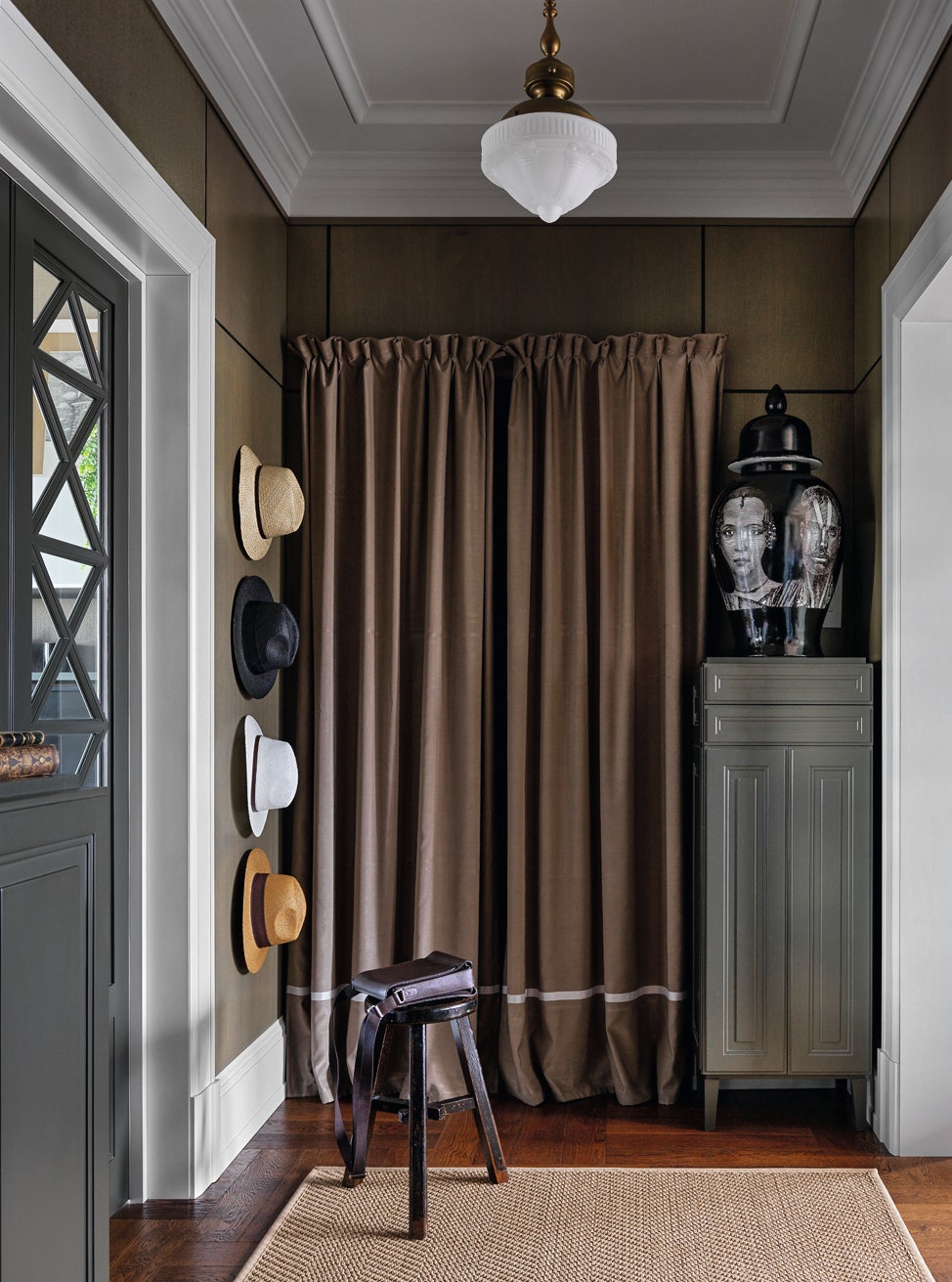 Initially, he did not plan to live in this apartment permanently, but he liked the result and the atmosphere of the house and the area so much that he nevertheless moved. “Columns are usually considered a pompous attribute, but when you see them every day, you understand that they create an atmosphere of comfort and at the same time make everyday life more solemn,” Marcel shares his impressions.

Farang Restaurant in the building of the Recording House

Luxury house near Kiev by 33BY Architecture by Ivan Yunakov